This series introduces Unity-Weld: an open source implementation of the MVVM design pattern that will help you to structure your Unity UI.

Unity-Weld is the glue between the Unity hierarchy and the code that implements your UI logic. It binds together the parts of your UI: it coordinates them and allows them to communicate. Best of all Unity-Weld is simple: simple to learn and simple to use. It works well with Unity and feels like it fits with Unity’s UI system.

In this series of articles I show you how to use Unity-Weld to take advantage of MVVM in your own Unity UIs. In part 1 I overviewed MVVM and introduced Unity-Weld.

In part 2 of the series I bring you examples that demonstrate Unity-Weld fundamentals: the most core aspects of binding a view-model to your Unity UI.

The code has also been tested with Unity 5.4.

A working Unity example accompanies this article and is available on github. Please get the code when you are ready to follow along with the examples presented below. Each numbered example has an associated Unity scene that you can play in the Unity Editor.

In the following examples I demonstrate the most fundamental aspects of Unity-Weld: how to bind your view-model to your view. You’ll learn how to use OneWayPropertyBinding and TwoWayPropertyBinding to data-bind UI properties to the view-model. Then we’ll look at how EventBinding binds UI events to view-model functions. There’s much more to Unity-Weld of course… but these are the basics you need to start using it.

In the following examples I show specific examples of creating simple UIs with Unity-Weld.

Please see the example Unity project to follow along with these examples.

1. One way property binding to a text field

The first core component of Unity-Weld is OneWayPropertyBinding which I demonstrate in this example. It is used to create a one-way data-binding between a property in the view and the view-model.

This UI is as simple as can possibly be, it is just a text box that updates periodically to random values:

Look at the hierarchy to see the structure of the UI. We have a Canvas [A] that contains a non-interactive Text field [B]: 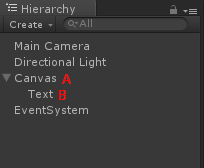 The UI elements in this example are coordinated by the view-model in MyViewModel1.cs. Select the Canvas [A] and in the inspector to see that MyViewModel1 [B] is simply a MonoBehaviour that is attached to the hierarchy: This is a conceptual overview of the connection between the view-model and the view:

Select the Text field [A] in the hierarchy and see that One Way Property Binding [B] is attached: In the Unity Editor you can select from any of the available properties using a drop-down menu: The INotifyPropertyChanged interface faciliates the synchronization of properties between the view-model and the view. Your view-model must raise the PropertyChanged event to notify Unity-Weld that a value has changed and the UI should be refreshed. This is the same data-binding mechanism that is used in WPF.

The Binding attribute annotates properties that are to be data-bound to the UI:

The second core component of Unity-Weld is TwoWayPropertyBinding. In this example I demonstrate how to create a two-way data-binding between a view-model property and a UI property.

The example UI here is only slightly more complicated than the previous example. We have a readonly text field and an editable input field. When you type in the input field the updated value is automaticallly replicated to the text field: The hierarchy for the 2nd example expands on the first example. Again we have a Canvas [A] and a Text field [B]. In addition we have an InputField [C] with a TwoWayPropertyBinding component [D] is attached: 3. Event binding to a button

The third core component of Unity-Weld and the last we are looking at in this post is EventBinding. This allows an event, such as a button click, to be bound to a function on your view-model, so that when said event is raised the view-model function is invoked.

For this example our UI is as follows: 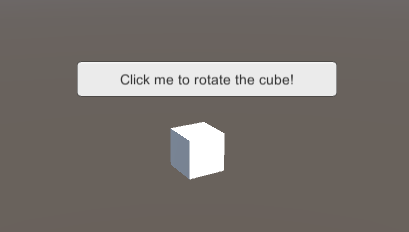 Each click of the button incrementally rotates the cube.

The hierarchy is as follows. We have a Button element [A] in our UI with an EventBinding component [B] attached. EventBinding has menus to select the Unity event [A] that and the view-model method [B]:

When the event is raised the view-model function is automatically invoked as indicated in the following diagram:

The view-model for this example is quite simple. We mark up the particular class and method with the Binding attribute:

Note that in this example MyViewModel3 doesn’t implement INotifyPropertyChanged, this is because we aren’t using any property bindings, here we have only used EventBinding.

4. Putting it all together

Example 4 combines all the components demonstrated in the previous 3 examples and shows how they work together.

The UI for this includes a text field [A] that displays the rotation of a 3D cube [D]. An input field [B] is used to input a new value for the rotation. There is a button [C] to click that incrementally rotates the cube. The setup of the hierarchy and the view-model is a combination of previous examples, so I won’t cover it specifically.

It is, however, worth looking at the full relationship between the hierarchy and the view-model in the following diagram to see how everything is connected: Please have a look at the example Unity scene to see how it all fits together.

In this second post of the Unity-Weld series, I’ve covered the basics of using Unity-Weld and its core components. Through examples I have have shown how to structure a basic Unity UI using the MVVM design pattern. Hopefully you are starting to see how this can help you structure a complex Unity UI.

Please stay tuned for Part 3 where we will delve deeper into more advanced features of Unity-Weld.

Are you interested in using threads with Unity? Wondering what promises, if anything, have to do with threads? In this post I answer an interesting question from Morgan Moon of Cerebus Interactive about the C# promise library, threads and Unity. I’ve been wanting to talk about threads for a while, so let’s get into it.

Bringing MVVM to Unity - part 1: About MVVM and Unity-Weld